You Are Here :Home > News > Industry News > The Difference Between Q Switch Laser And Picosure Laser

Our company Bestview has been dedicated in the beauty equipment manufacturing for more than 15 years. Now we have our own R&D team, so we have the alility to custom the beauty machine according to customers’ request.

As a beauty equipment manufacturer, this post we will share the differences between the Q switch laser and the picosure laser.

The principle of laser freckle removal is similar. It is through the selective photothermal action of laser, which aims to “crush” the pigment agglomerates in the skin, so that the pigment agglomerates become tiny pigment particles, then the body will metabolize them. The spots will get weaker and lighter after treatment. If you do it a few times, you will achieve the effect of “disappearing”.

What Is Picosure Laser?

The picosecond laser can produce high-energy, precise-focusing monochromatic light with a certain penetrating power, which can cause high heat in parts when penetrating the skin structure. Picosecond laser freckle beauty is the use of laser to remove or destroy the target structure, to the purpose of cosmetic treatment.

What Is Q Switch Laser?

The Q-switch laser therapy device adopts the principle of photo-blasting, that is, through the ultra-pulse time of milliseconds and microseconds, the laser can instantly reach the deep layer of the skin through the epidermis of the skin, so that the pigment particles inside the skin are instantly pulverized, and the pulverized pigment particles will be pulverized. Human macrophages will swallow them and transport them away.

What Is The Adavantages Of Picosure Laser?

The shorter the action time of the laser, the less the laser energy absorbed in the target tissue is diffused to the surrounding tissue, and the energy is most confined to the target, protecting the surrounding normal tissue, so that the selectivity is stronger.

The pulse width of the picosecond laser is only one percent of the traditional Q-switch nanosecond laser. The light energy is too late to be converted into thermal energy, and almost no photothermal effect is generated. After being absorbed by the target, its volume is rapidly expanded, resulting in a photomechanical effect. Blasting and tearing into pieces, so that pigmented skin lesions produce a stronger effect in a shorter number of times.

If the pigment particles are compared to rocks, conventional lasers can break the rock into pebbles, and the picosecond laser can break it into dust. At the same time, because the thermal damage becomes smaller, the probability of idiopathic pigmentation is also greatly reduced. 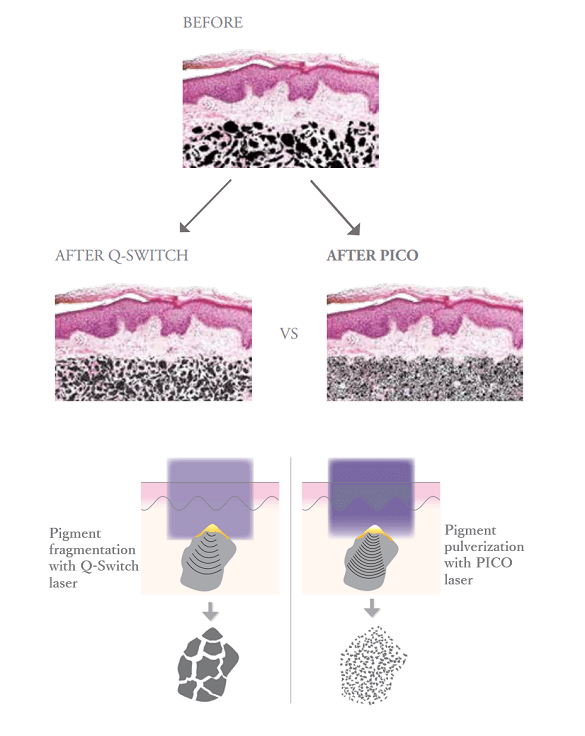 Postoperative redness can be resolved within 12-24 hours; it has a wide range of applications, and can simultaneously improve various facial problems at the same time. Nearly zero damage, no scarring, dislocation, and quick recovery, suitable for people with fast pace of life. Second, it does not have any problems with scars, coloration, and blackness.

If you want to remove the tattoo with picosure machine, we recomand our portable picosure tattoo removal machine, please contact us for prices.